Video is a rich medium, and a powerful tool when used in research. Rather than objectively representing participants or environments, it allows these contexts to be recorded, assembled and read in different ways.

Whilst video has been used as a tool in ethnographic practice for some time, research that uses video often avoids using it in the dissemination of that research — some academic journals accept video essays or documentaries, but most still rely primarily on written articles. In these cases, researchers are relegated to using screen-captures of video or linking to external content in order to demonstrate their findings. Fewer still recognise the reflexive relationship between the synthesis of research and video representations of the research context.

This site is an attempt to address these concerns. First, it aims to present video alongside descriptive texts in a way that grants it equal weight and criticism. Second, it actively recognises the reflexive relationship between the synthesis of the research context and the video representations of it, as demonstrated through the way video is tagged, described and embedded in the content of the site. Finally, it opens up this reflexive relationship to the research community by providing an archive of the video content generated through the research.

The essays presented on this site use video embedded within text to highlight an argument or particular activity observed through our research. Rather than alluding to the video through textual descriptions or screen-captures, the videos are a key part of the argument of the essays. They are intended to be watched in-situ, interpreted through their own accompanying text descriptions, tags, and surrounding argument. Similarly, they aim to be key components of that same argument. In this way, we have attempted to embed the videos not just within a body of text, but to include them as key textual elements in their own right.

The essays Sensory Ethnography and Stories from the Home are good examples of this. These essays show that participant activities and homes can be assembled and interpreted through multiple frames, but that those frames aren’t the only ways of deriving valid interpretations.

To develop this site, Paper Giant designed an innovative video tagging system that allowed us to take a snippet of any of our videos, write some explanatory text, and embed them into the pages you see. This means that the same video can appear in multiple places, but with different interpretations made visible at different times. This tagging system also allows for the concurrent display of multiple interpretations, which can be accessed by watching a tagged video in the Video Archive. 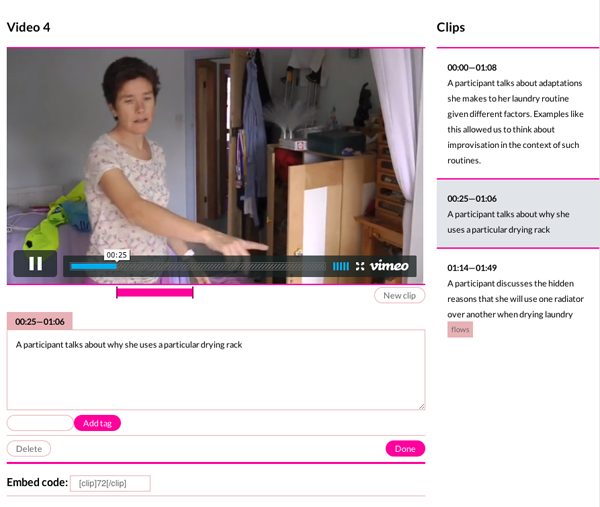 When thinking about the use of video as a dissemination tool, it is important there are simple ways for video to be used within the flow of text as a core part of an academic argument, rather than just used to support text content as ‘examples’.

When creating the content for this site, having the video tagging system on hand meant that it was possible to ‘write around the video’ and use small video clips as textual elements in a way that would have been difficult if we could only reference entire videos. It also made it easy to swap videos for more appropriate ones, and move videos (or parts of videos) around in the text.

In doing this, we are advocating for wider recognition of this reflexivity, where the line between the mode of dissemination and the interpretation of the research itself are blurred. This reflexivity in practice is most visible in the Video Archive, where visitors to this site are able to view entire videos from the research, and see how each video was used and interpreted by LEEDR researchers. We designed the archive to highlight that the videos were actively interpretation (and reinterpretation) for different contexts through the site. We also designed this to provide an opportunity for the wider research community, and indeed the general public, to find their own inspirations and insight in the video representations that we produced.

The video archive shows how each video, sometimes even the same sections of video, were used in different contexts through the site.

APIs for Academic Use

This site is also an example of how ‘public APIs’ provided by online video hosting services like Vimeo can be put to academic use. An API (Application Programming Interface) allows different pieces of software to ‘speak’ to each other. In practical terms, it means that we can host videos on Vimeo, write a simple piece of software to manage video-tagging data, and display both elements on this site in a consistent way — all without having to manage complex video hosting and encoding infrastructure. The time and cost involved in managing online video is a major factor in dealing with video as a research tool, and so finding new and innovative ways to utilise existing web services for academic dissemination is an area worth further investigation.